Most of everyone has heard of physics. The incredibly interesting field of science that studies matter and how it moves and its behavior. On the other hand the not so familiar or not easy to comprehend quantum physics seems to be eluding the general public in all of it’s interesting nature.

Quantum mechanics goes by several names including quantum theory, quantum physics, and quantum field theory all of which are about quantum physics. Quantum theory grew from Max Planck’s solution in 1900 to the black-body radiation problem as well as Albert Einstein’s 1905 paper which gave a quantum-based theory to give an explanation for the photoelectric effect.

It would seem that quantum theory, though called ‘theory’ is a very reliable explanation for many observations made by physicists the world over. An initial understanding needs to be met before we can delve into the more interesting things.

A Rudimentary Baseline for Quantum Theory

Firstly something that you must constantly keep in mind about quantum mechanics whenever reading about said topic, are as follows. While saying something is both a particle and a wave is rather inaccurate, the quantum physics community speaks of such things as a 3rd category. An object with both particle properties (they are quantifiable and can be located to some degree) and wave properties (they have a frequency, wavelength, and some can spread across space).

Things in Quantum Physics are Subtle

Everything that happens in quantum physics occurs in small or subtle amounts. Energy is talked about as some derivative of a fundamental energy. Light is characterized by its frequency and wavelength. Everything is always expressed as a multiple of another energy or its fundamental base. Meaning the total energy in a field is denoted as an integer multiple of that energy. Much like 1 times, 4 times, 24 times, (I’m sure you get the idea). It will never be denoted as a fraction, square root, or other strange number.

Quantum Theory is All About Probability

Perhaps one of the most interesting parts of quantum theory in my opinion is the fact that everything about quantum theory is based on probability. For example. In classical physics one can observe a particle or in this case a baseball (representing a particle). The baseball is stationary at point 0 and will move in a 2 dimensional way. In this case horizontally.

(The image given is much more complex than the example. Hopefully after you ready the example you will be able to understand. This is a image giving the answer to Schrodinger’s equation for the hydrogen atom at different energy levels. The brighter areas represent higher probability. Image from wikipedia.) 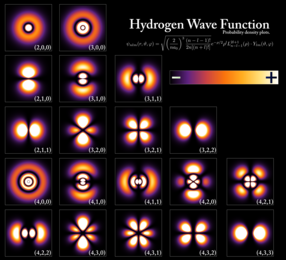 So if I use my ruler I can measure 5 units from the baseball in space and put my little marker where it will be. Sure enough a second later the baseball arrives at the marker.

In quantum physics it is completely different. In order to explain this better we will draw a line on which the baseball will travel. We place the baseball at point 0 on our cosmic ruler. However where we would normally start this simulation as with classical physics, we must also add a wavefunction which is represented in equations as the greek symbol psi: Ψ. Imagine two traffic cones touching circle to circle in the middle of the baseball with the points going in opposite directions along the axis we drew.

Therefore in quantum physics it is fundamentally impossible to predict the location of a particle until after it is tested or becomes apparent.

Quantum physics is not local

The theory of entanglement was given by the late great physicist Albert Einstein. This theory involved the state of a particle in a given area to be reliant on the state of another particle somewhere else. Even over great distances.

This spurred up doubt as that would suggest that something would be traveling faster than light which most know as the universal speed limit. That is the fastest any two parts of space can ‘talk’ to each other. That is the max speed signals from satellites, stars, any form of radiation, and mass less particle.

This theory of entanglement suggests that this information which is reliant on another particle is traveling faster than light. This video explains it better than I can through text.

Everything that occurs in quantum physics is on the atomic scale. Hardly ever are things visible. Unless it is an experiment like the one shown above in the particle and wave section of this article.

There really isn’t anything else to explain about his part of quantum physics besides what interactions there are it is minute and atomic in size.

So you have made it to the end of this article. Thank you for reading this article or even taking the time to go to this website. You can expect more articles relating to quantum physics in the future as it is a topic I find fascinating.

Sources for images and information. (The list of the basics was taken from the following website) https://www.forbes.com/sites/chadorzel/2015/07/08/six-things-everyone-should-know-about-quantum-physics/#4f372f567d46