Time is a very interesting phenomenon. The use of the word phenomenon accurately fits with how we experience time . The word is defined as “a fact or occurrence which can be observed or observable. ” We all experience time differently. The difference most of the time is very³ small but time is still relative. The idea of time travel has persisted for hundreds of years. In science fiction and philosophical works the ability to travel through time whether that be the future or the past has been a captivating idea for a very long time.

The earth is 29 million miles away from the sun. The sun, much like the millions of other stars in the universe, emit light. Light is what we as humans use to see. A very small part of the electromagnetic spectrum to be precise. Yet with that small part we have a incredible view of the world around us. However light doesn’t travel instantaneously. 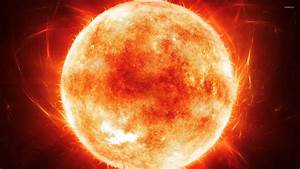 The light we receive from the sun takes to get to earth is about 8 minutes. Which means the view we have of the sun is what the sun looked like 8 minutes ago.

The sun being so far takes light about 8 minutes to get to us. So when we look at the sun (Hopefully with the necessary protective equipment) we are seeing what the sun looked like 8 minutes ago. If the sun were to spontaneously disappear we wouldn’t know until 8 minutes after the fact. 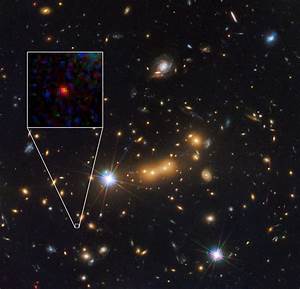 MACS0647-JD as seen from the Hubble telescope. Hundreds of collisions and other events could have taken place within the amount of time the light has taken to get to us.

With the galaxy MACS0647-JD which is 13.3 billion light years away, we have a window into the infantile time of the universe. The light that comes from this galaxy is almost as old as the universe itself. We are looking back to a time when the universe was only 420 million years old compared to its nearly 14 billion year age currently. During this time hydrogen was beginning to form and the first stars were being born.