Most definitely a delayed article on my part but rest assured it will be done. Recently on Tuesday February 6th, 2018 the worlds most powerful rocket successfully achieved liftoff from Cape Canaveral in Florida. This rocket will change space exploration for decades to come.

For those fortunate enough to witness the almighty spectacle of the simply gigantic Falcon Heavy take off from Cape Canaveral you witnessed the most powerful rocket in the world take off on its maiden flight to Mars. The deep thunderous roar of the rocket engines as they pushed the massive spacecraft into the air and eventually into space is something that can only be appreciated in the flesh.

The Youtube channel SmarterEveryDay has a fantastic video where he was one of the very few that was allowed to stand atop the vehicle assembly building at Cape Canaveral where he got a once in a life time opportunity to see this rocket take off.

The amazing audio he uses immerses you in the launch and I recommend you check it out. Not only did he manage to capture some stunning audio but the incredible view he had of the launch makes for a truly awesome experience. I can only say I am extremely jealous of his opportunity to witness such a great event.

In the video there are details that don’t seem to make it to the spotlight of the take off and booster recovery procedures that are deeply fascinating. The two side boosters which successfully landed autonomously on their target locations created sonic booms as they came down onto the landing pads. Not only do you get to hear the amazing sound of a sonic boom but you get to hear more than one with his amazing audio.

Specifications of the Falcon heavy

The Falcon Heavy is the most powerful rocket to ever be launched to date. With the ability to carry a payload of 70 U.S. tons into low earth orbit it is truly a large step forward. In comparison to previous rockets and their payload capabilities, the Falcon Heavy is an absolute giant. The deeply loved and cherished Space Shuttle could only put a payload of 25 U.S. tons into orbit.

The rocket itself is made from three Falcon 9 rockets ‘strapped’ together. A total of 27 Merlin engines on three different cores allow this rocket to generate 22,819 KN of thrust for its first stage.

What does this mean for the future

With this advancement in rocket technology significantly large payloads can now be taken into low earth orbit allowing for larger satellites. These satellites can be used by U.S. Intelligence or military satellites.

Elon Musk could also enact his plan to create a constellation of thousands of satellites that would provide broadband across the globe. This could be achieved with a couple or even one Falcon Heavy.

Currently however since the payload which is now on a trajectory past Mars’ orbit. The red roadster of course is the first automobile to leave the earth’s atmosphere. It’s current orbital period around the sun is around 2 years for us.

Now spaceman and the red roadster will traverse around the sun and other planets for quite a long time. 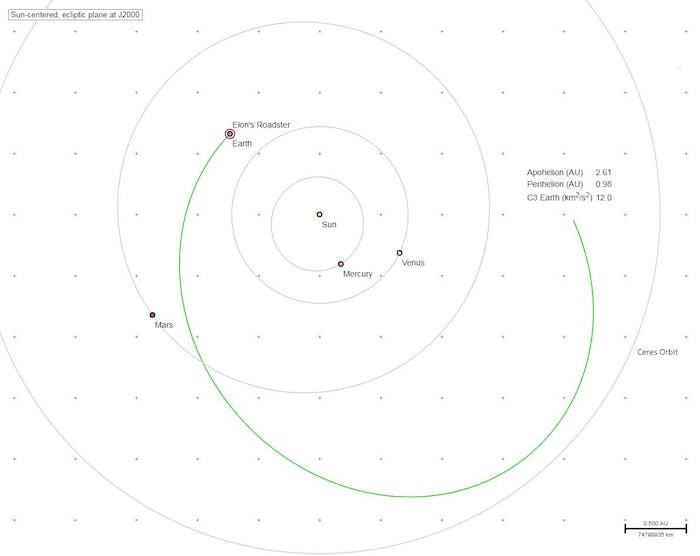 The Roadsters trajectory through the solar system.

One can only hope that with this major accomplishment that the road to mars is almost done being paved. Now all we need to get there is a little elbow grease and another rocket. With the Falcon Heavy we could now send missions to Mars to establish a base of operations. We could even send larger robots to assist in the construction of the human habitats. Another door of possibilities has opened. Now all we have to do now is be patient and wait.

Congratulations to Elon Musk and the SpaceX team on this great accomplishment and I personally hope that all of your future missions go well.